Charles Rees won the latest round of the Wheelers’ time trial series, lowering his course best time down to 23.18 in the process, a very quick time for a hilly course.  James Oliver, one of several riders from the Wessex Wizard triathlon club to have taken part in the series this year, was second fastest with 24.17 with the winner from last week’s Bruton tt, VO2 rider Sean Frost, third.  Vince Hounsome was fifth and retains the championship lead.  Simon Rouse knocked a minute from his course best time with 25.14 while Julian Calloway and Andy Parsons also recorded their best times on the Wyke course.  Chris Mullett had his first tt back from injury and got round in 30.47 while Jane Pritchard was the fastest of the lady riders.
There were several junior riders present, most of them from the Martin family from the Chippenham Wheelers.  Ashley Martin was the fastest junior rider (11th overall) followed by Josh Day, another rider who recorded a course best time.  Tom Brown was third, ahead of Adele and Erin Martin.
All the times are here.
There are still some people yet to renew their membership for this year, please get your subs into Mary Asplen by next wednesday as the points tables will be updated after next week’s tt with non-members and second claim riders removed.

Last weekend saw several Wheelers take part in Round Two of the British Mountain Bike Championships, held at Wasing Estate near Newbury.  Paul Hopkins followed up his second place in Round One with a win in the Vets category, riding for the Merida team.  Paul completed the four laps in 1 hour 16.04 to take the win by 11 seconds.  Nigel Brown (GDW) was 20th in the same race (1.23.56) and Andy Parsons (Offcamber) 25th.  In the Sport category race, Kim Little (GDW) finished 21st (1.24.57) and Julian Chown 40th (1.29.24) while Emma Bradley (Torq Development) was third in the Womens’ Masters race.
Jane Pritchard had her first taste of an Open time trial at the Andover Wheelers 25 mile event.  Jane’s finishing time was 1.09.50, an excellent effort at her first attempt at this distance and in conditions that most riders found very hard, especially on the return leg.  Don Tanner finished with a time of 1.07.08 and Steve Way (Ratae RC) 1.06.54.
James Chant travelled up to Cheltenham to ride in the latest round of the WTTA Hardrider Championship and managed to record his highest ever placing in this series, coming home in 17th. 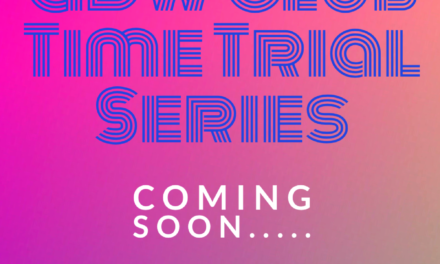