A record 42 riders turned out on another unseasonably warm evening for this week’s Stour Provost tt.  The return of Paul Hopkins saw a tight battle between him and Charles Rees, with Paul’ time of 22.33 beating Charles by 15 seconds.  Ashley Martin  put in a good ride to get third place ahead of Julian Chown and James Gray who gets faster by the week.

Andy Parsons and Julian Calloway finished in 16th and 17th in their first tts of the year while Troy Woolacott put his new aerobars to good use to knock 39 seconds from his course best time.

Liz Hutson took a close win from Jane Pritchard, just seven seconds between them while Jenny Lucas set her best ever 10 mile time with 29.05.

Elsewhere, Simon Rouse racked up a load more miles with two events in Worcestershire.  Last Saturday, at Warwickshire RC’s 10 mile Open near Alcester, Simon was 28th with a time of 23.31 after a tough return leg.  On Sunday Simon competed in the Beacon RCC Mountain time trial, a hard 40 mile event which has been running since 1948.  As always, this event attracted some quality riders and a large entry of 89 competitors.  Simon finished with a time of 2.03.57 to give him 31st position.

Chris Mullett followed up his 10 mile pb from last week with a new 25 mile pb at last week’s event on the Usk course in West Wales, run by CC Blenau Gwent.  Chris set a time of 1.05.27 for 90th place after a slow outward leg and quick, tailwind-assisted second half .  Steve Way (Ratae RC) was 81st with 1.03.50.

The EDCA series continued with round four with CC Weymouth’s 10 mile event near Warmwell.  The first five miles were slightly downhill and the riders had a tailwind to push them along, while the second five miles were predictably hard.  James Chant set a new 10 mile pb with 23.17 for 13th place, Vince Hounsome was 18th with 23.44 while Alan Smith was pleased with his time of 25.27 (29th) in his first event of the season. 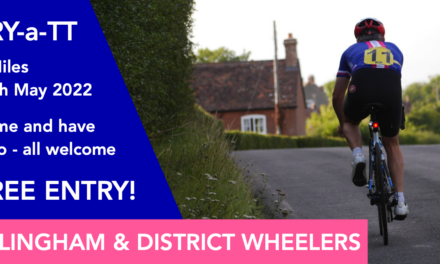