There was another good turnout of 19 riders for the second round of the GDW Hillclimb Series.  They had to battle against a strond headwind up the climb, which obviously slowed everyone done quite a bit.  Junior rider Josh Day raced up to take his first outright win setting a time of 5.07.  He was seven seconds ahead of VC Walcot’s Barry Holley who was riding a fixed-gear machine.  Third went to Simon Barfoot, just one second ahead of James Chant while Tom Brown beat his dad Nigel by five seconds.  Results here

At tonight’s time trial, 24 riders tackled the hilly 19 mile Bruton course for the first time this season.  Paul Hopkins finished more than a minute and a half clear of second placed Nigel Brown.  Vince HOunsome beat Simon Barfoot for third by just one second with Julian Chown and Kim Little close behind.  Josh Day and Jane Pritchard both recorded quick times to win the juniors’ and women’s sections, Josh with a brilliant time of 50.22 for 8th overall.  Full results here 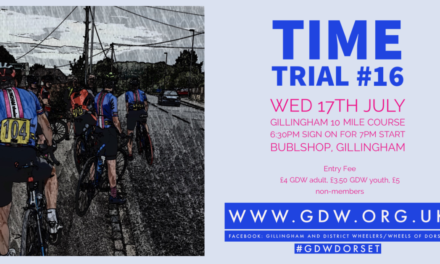