The Castle Combe Easter classic is on this weekend on Good Friday and has a full race programme for all riders, see BC Site here for more info.   There will be a number of Gillingham Wheelers attending  this event, and this a particularly good event for Juniors to participate in as its a closed circuit and traffic free.   Anyone wishing to attend who wants a lift please contact Mike Smith who will hopefully be able arrange one for you.

Also over the last few weeks we have seen many Gillingham Wheelers in road race action:

Thruxton circuit race March 18th
Jane Pritchard finished 12th in the Women’s event in her first road race competing over 40Km. Chris Mullet and Josh Day were in action in the 4th Cats over 40Km,  Chris had a good race and finished comfortably in the bunch in 41st place while Josh wasn’t happy with the amount of jostling he was receiving and not wanting a repeat of the Ludgershall crash withdrew before the end.  Barney Cox was competing in the U16 race, and had a tough race finishing 20th.  Mike Smith and Pete Humpreys were in action in the 3rd Cat race over 56Km and both were content to stay in the shelter of the bunch until the sprint finish, Mike finished 27th and Pete 33rd.
Thruxton circuit Race March 25th
Josh Day and Chris Mullet competed in the 4th cat race; Josh finished a good 6th which gained him 4 points and promotion to 3rd cat.  Unfortunately Chris had a fairly bad crash and suffered cuts/bruises to his arms/legs so is currently out of action for a while.  Barney Cox had a much improved result in the U16 race finishing further up the field in 12th place.  Pete Humpreys in the 3rd cat race also made a significant improvement finishing in 22nd place
Pittards/Ham Hill Race
3 Gillingham wheelers were in action on the 45 mile 3/4 cat race held at Yeovilton and remarkably all 3 finished which is unusual.  Unfortunately a breakaway group of 8-10 riders got away on the 1st lap and stayed away until the end of the race with no GDW members in the break.  Mike Smith produced a strong finish out of the remaining riders  finishing 15th, with Pete Humphreys and Nigel Brown close behind.  In the 60 mile E/1/2 Ham Hill race Charles Rees racing for Team Tor 2000 had a tough race with the avg speed in excess of 27mph. 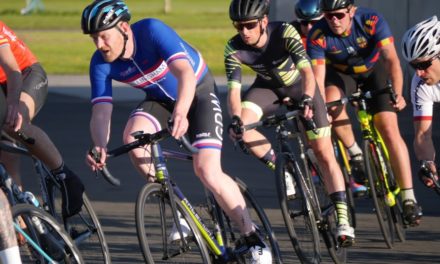