Lizzie Hutson was in imperious form as she stormed to victory in her
age group at Ironman UK
in Bolton on Sunday 1st August.  It was her first attempt at the distance, in
which she managed to qualify for the Ford Ironman World Championships in Kona,
Hawaii.

She started the 2.4 mile swim, which took place in the cold
waters of Pennington Flash in Leigh at 6:00am, along with another 1200 ironman
athletes,  and got out of the water  1 hr 2 mins 31 secs later in 191st  place.  After the first transition it was onto
the 112 mile bike course which consisted of 3 laps and took in the notorious
Sheep House Lane which passes over one of the highest points in
Lancashire.  6 hours 18 minutes 10 seconds after
getting on her bike Lizzie arrived in transition for the second and final time
in 149th place overall.

She then embarked on what was to be the
hardest run she has ever undertaken.   The run consisted of 2 laps which
culminated in Bolton City Centre with a grandstand finish in front of huge
cheering crowds outside the City Hall.
Lizzie took just 3 hrs 31 mins 23 secs to complete the 26 mile run giving her an
overall time of 10 hours 59 minutes and 29 seconds, which was the fastest in
her age group by over 12 minutes and good enough to take 6th female
overall, beating some pro athletes in the process.  Her time was the 99th fastest of
the day in both male and female categories.

Lizzie’s journey to Ironman UK
started over 9 months ago and she has been training and competing hard, some
weeks putting in over 20 hours a week in the pool, on her bike and also out
running.  Lizzie would like to thank
everyone who has supported her. 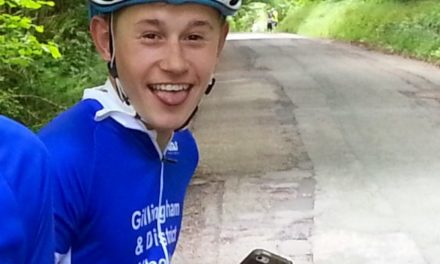 From Spectator to Competitor!