The 14 riders who tackled the final GDW event of the year were treated to a tailwind all the way up Mere Hollow.  Nearly everyone managed a pb and fastest of all was the 2010 series champion Kim Little, getting home in 4.27, nkocking seven seconds from his own course record.  Barry Holley (VC Walcot) was also under Kim’s previous record with a time of 4.31 on his fixed-wheel bike.  James Chant got under five minutes for the first time with 4.44, just ahead of Charles Rees (4.49).  Josh Day was fastest junior and fifth overall with 5.11 while Emma Bradley beat her own course record with 5.58.  Chris Mullett knocked nearly forty seconds from his first attempt last week to tie with Grahame Reed on 5.47 and John Phillips got under seven minutes for the first time this year with 6.53.
The results and final championship table are here.
If you are in the mood for more hillclimbing, head over to picturesque Burrington Coombe near Cheddar this Sunday where both Somer Valley CC (10am) and Weston Wheelers (1030am) will be having their club events.  Meet at the tea shop car park near the bottom of the climb.

*STOP PRESS!*  Weston Wheelers appear to have changed their start time to 10 am as well as SVCC, not sure how both clubs are going to run at the same start time – two riders-at-a-time races?  Perhaps we should try that at Mere! 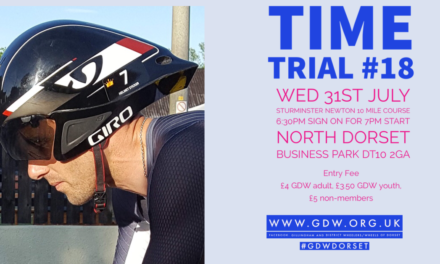