Thanks to everyone who turned out Wed night to the Club AGM the following is a digest of the discussions and decisions made:
Committee:    John Holman and Simon Barfoot have decided to stand down as Committee members and our grateful thanks for all their help throughout their tenure is sent to them. Don Tanner and Mark Geddes have volunteered to step into the breech and with these new additions the committee was agreed by unanimous vote to continue as constituted for another year.
Club Membership:    For many years the membership fees have remain static and over the last 2 years it has become obvious that this is no longer viable with a working loss of over £100 being made each year since 09.  To rectify this deficit and allow the club to grow and provide more for its members in the way of events, trips to velodromes and races etc it was proposed and agreed by unanimous vote that membership fees will rise this year by 50%.  This makes a senior fee £15, junior £9 and family (2 adults, 2 children) £30.
For those who have already sent cheques to Mary, we will be asking for the top up to the new fees. For all others please endeavour to have your fees paid by end of April, no later, after that we’ll impose non-member costs for event entry and restrict any club sponsored events to fully paid up members only.
Events:    A vote of thanks was made to Vince Hounsome for his Winter MTB Series and to Julian Day for his great assistance.  A Summer Series will be investigated, along with possible MTB time trials and night races, watch the website for details.
Sundial:    Use of the monies raised via the club’s charity ride, The Sundial Challenge, for local youth cycling has been a bane for the past 2 years.  It was agreed that the committee investigate and purchase a pair of competition racing rollers with timing equipment.  This will be a club asset that can be used by members on Club Racing nights and be taken into schools or to local events to engender interest in cycling for both younger and older audiences.
Time Trials:    Use of a rear red light on Southern TT courses was explained and the Chairman will approach our sponsor to see if any lights can be obtained for those riders who forget, however this will incur a small cost to hire the light for the ride!  Highway Code compliance was again re-iterated for all riders and sanctions will be imposed for transgressors. Also an appeal for marshalls, if you know of anyone who would like to help bring them along. The Full Season Fee will be operating again and this includes a requirement to marshall at least once to enjoy the benefit of a reduced price entry.
Club Century Ride:    There was sufficient interest shown by those at the AGM to continue to plan and run a Club Century ride, that’s an imperial century, 100 miles, just in case anyone was wondering.  Current routing proposed goes from Gillingham via Glastonbury to Bridgewater then back via the Somerset levels, through High Ham, Somerton and Ilchester, south of Yeovilton airfield then North Cheriton, Templecombe, then picks up part of the Stour TT route before rolling back into Gillingham via Guys Marsh. Watch the website for more details.
Any questions or offers of help for any club matters then get in touch, Daryol. 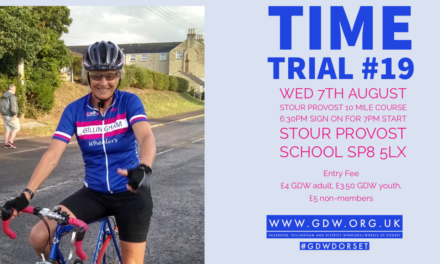