Wyke 10 and Other Results

Tonight’s Wyke time trial saw a fifth win for Paul Hopkins this season, his time of 23.12 was enough to beat Julian Chown (23.39) into second place.  Charles Rees was riding in non-aero mode and came third, about a minute down on his usual tt bike times.  French rider Yvon Momboisse (UC Aurillac) followed his recent strong Mere hillclimb ride with a 25.27 while Chris Mullett (28.31) took full advantage of the early tailwind to record a time some thirty seconds faster on the Wyke course than he has managed before.  Alex Stonebridge, riding a mountain bike and competing in his first tt, did well with 30.37 while Jane Pritchard and Josh Day won the ladies’ and juniors’ sections.
It’s been quite a while since the last time, but there was some dangerous riding at the Mere t-junction by a pair of riders, presumably desperate to do well in such a major event.  Just so everyone knows for the future, it is not safe or acceptable to overtake a waiting car on it’s right, turn left across the front of it and out into the path of another car that the first car is waiting for.  The marshals shouldn’t have to deal with annoyed motorists or potentially be scraping riders up off the floor.

At last weekend’s Cardiff RC Open 25 mile tt at Usk, a small squad of GDW riders turned up to battle against a very tough return leg against the wind.  While most people were a minute or two slower than their usual times, the stand out performance came from Jane Pritchard who knocked four minutes from her 25 p.b. to finish in 1 hour 5 minuntes, 40 seconds.  Simon Rouse and Richard Hansford were seperated by just one second, Simon on 1.01.17, while Alan Smith finished in 1.03.19 and John Phillips in 1.09.41.  Chris Mullett was also in 25 mile tt action, riding at the Bournemouth Open on th ePoole bypass, finishing 55th in 1.08.16.

At the Antelope RT 10, held on the Andover bypass, Vince Hounsome was disappointed with his time of 22.32 on what he felt was a quick day, while Don Tanner seems to be getting back to form and did well to record 23.07.  Maria Phillips headed over to Frome for the Frome Wheelers club 10 last week and did very well, managing a 10 mile p.b. of 30.39.

In recent road races, James Gray picked up some licence points for his fifth place at Ilton in the 4th Cat race, while Mike Smith got into 6th in the sprint finish in the 3rd cat event.  James Gray and James Chant took part in the 3rd/4th cat race at Thruxton last weekend.  This event was the Southern Circuit Championships and saw an entry of nearly 80 riders.  James Gray tried a late race getaway in an attempt to join up with a small breakaway group but ultimately came home 14th (second place 4th cat rider) with James Chant 24th.

Paul Hopkins’ scored yet another mountain bike win in the Southern XC series, this time at the Crow HIll course near Ringwood.  He has dominated the Vets field this season in both this series and the Nationals.  Andy Parsons was 15th in the Vets race while Emma Bradley finished third in Masters Women race. 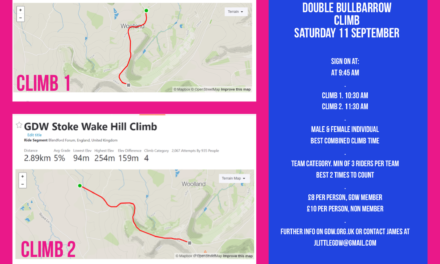 Final Hillclimb and Other Results