Sunday 3rd of May saw the 2015 edition of the Tom Hawkins Spring Classic. Despite many GDW entries for the event, only Charles Rees was selected to start. The 80 rider field featured mainly second cat riders, which coupled with a testing 9 lap course promised to make for a great day of racing.

After a 4 mile neutralised section from the HQ at Uffculme the race got underway through the narrow rolling Devon lanes, before sweeping onto the A38 and tackling the attritional climb of White Ball hill. Early moves came and went with nothing sticking for the first hour. Then the weather changed and torrential rain took its toll. It wasn’t long before the peloton began to split up and riders began getting dropped and climbing off. Charles riding on his own sat tight in the peloton as the torrential rain set in. With 5 laps to go the splits had settled to 3 groups on the road, 2 in the break, a chase group of 9 and then the peloton containing Charles. This format continued with the gaps growing quickly. With 2 laps to go Charles attacked the peloton and rode solo across a 90 sec gap to the chasing group – despite successfully bridging, it finished his legs off for the final climb and he was dropped and left chasing to the finish. James Porter of Team Tor 2000 took the win with Charles finishing a credible 13th.
Strava Activity Link 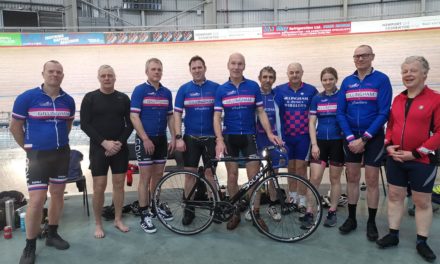