TLI’s two day stage race took place this weekend, with a very strong line up of riders this year.  As always, stage one was a hillclimb prologue up Wick Lane in Downton.  Kim Little led the way for the GDW entrants, racing up in 4.14, just a few seconds ahead of Josh Day on 4.20.  Liam Teesdale, Mike Smith and James Chant were close together with times of 5.05, 5.06 and 5.07 respectively.  James Gilfillan (Contre la Montre) set the fastest time of 4.01 from VC St Raphael rider Rowan Horner (4.05).
Once the groups had been sorted for the 42 kms handicapped road race, it was out on to the New Forest for the riders, with organiser Glenn Longland stationing himself at the roadworks traffic lights on the course ensuring none of the groups were held up.  James, Mike and Liam were all in group one and they made good progress, largely staying together until a few of the riders from the later starters caught up.  From there, the pace increased through the finall miles and through the village of Lover.  Onto the steep finishing climb, and a handful of riders pulled clear with everyone else in strung out behind.  Tony Kiss of Stratford CC crossed the line first ahead of Phil Reynolds from the Peter Hansford Cycles team with Gilfillan in third.
James was well placed at the bottom of the hill but couldn’t quite hold onto a top ten place finishing 13th, Mike was a few seconds behind with Kim and Liam a few further places back from Mike in 27th and 29th.  Liam crossed the line eating a gel, not realising that the finish was so close.  Josh had struggled in the race with a cold but was only a minute back from the winner in 41st.
As always, the overall winner would be decided in the 37 kms time trial on Sunday morning.  The lovely warm sunshine which had been present for day one had been replaced by low temperatures and fog, with a North wind making the middle section of the hilly course pretty hard.  James Gilfillan blitzed the opposition with a superb time of 54.11 to win both the tt and overall, with Rowan Horner second with 55.56.  Kim was quickest of the ‘home’ riders, a 1.02.43 just beating Josh – again! – who did 1.02.50.  James finished on 1.05.12 while Liam found the cold conditions not to his liking at all and finished with 1.12.12.  Mike was a non-starter for the tt.
Kim was the highest placed of the Wheelers overall, in 13th, with Josh in 20th, James 29th and Liam in 40th. 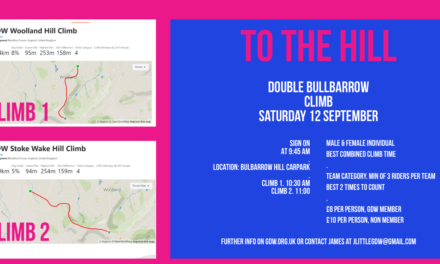