The penultimate round of the Wheelers’ mountain bike series was held in lovely warm conditions today, although the course was as muddy as ever in places.  It was a much harder course than last month’s fire road blast, including the notorious climb of The Shoot.  Event organiser Vince Hounsome was the clear winner pulling clear towards the end of lap one and finishing well ahead by the end of the 6 lap race.
James Chant had some gear selection problems on his way to second, but these problems were nothing compared to Josh Day’s, whose bike was down to three gears after just half a lap.  Josh and James were together throughout the race, Josh getting ahead uphill with James reeling him back on the faster sections when Josh was spinning out.
Fourth went to Ben Day who had a first lap crash, with Julian Calloway (fifth) and Alex Ludgate (sixth) the only other riders to finish on the lead lap.
Liam Teesdale was first Junior rider while Karen Allum wrapped up the women’s series title with a round to go.
The Youth title was also decided today, Toby Easby well ahead of the others again to take his fourth win.
Full results and series points here
Final round next Sunday, March 4th
Thanks to Chris Mullett for the photos, Video from Mike Smith is on the Video page and YouTube here 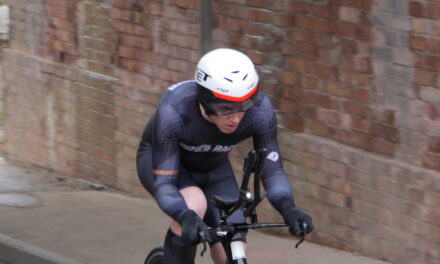