The hillclimbing season is well and truly in full swing now, and there have been several recent events in the region, most of them featuring Simon Rouse.  Last weekend, Simon took part in the VC Walcot and Severn RC Opens, both of which were the ‘short and steep’ type of hill.  Simon was 17th at the Severn event, getting up Hinton Hill near Pucklechurch in 2.30.2.  The overall winner was Matt Smith (Corley Cycles) in 1.50.8.  VC Walcot use the hill which goes up past the American Museum at Claverton Down near Bath, Simon was 10th in 3 minutes 40, with Rob Gough (Artic Premier RT) winning in 2.45.

This weekend, Simon took part in a brace of Chippenham Wheelers Opens, starting with their hillclimb at Lacock.  Bowden Hill is over a mile long with a shallow start but steep finish and Simon completed the climb in 5.48 with first place going to Steve Allen (Kenilworth) in 4.31.  At today’s 3-up team time trial, he and James Chant teamed up to tackle the U59 Hardrider course from Bishop’s Cannings and back via Lockeridge and West Kennet, taking in the climbs of Milk and Morgan’s Hills.  Unfortunately, the third member of the team, Emma Bradley, had withdraw due to injury.  Simon and James completed the 23 mile course in 1.01.54 for 11th place.  The winning time of 53.52 was set by the VC St Raphael trio of Simon Berogna, Simon Tout and Steve Walkling.

James Chant has also been hillclimbing, this time at the long but picturesque Burrington Coombe, near Cheddar, at the Somer Valley CC event.  Riders were using this as a practice for the forthcoming Hardrider Open at the same hill.  James was fifth with a pb of 9.06.  Chris Mullett was also fifth at today’s Weston Wheelers Open hillclimb, although unfortunately there were only five starters!  Chris finished in 9.48, Qoroz rider Luke Dunbar winning in 6.40.
The startsheet for the afore-mentioned Burrington Coombe Open, which is the final round of the 2010 Hardrider series, can be seen here.  Ride over and give the local riders a cheer. 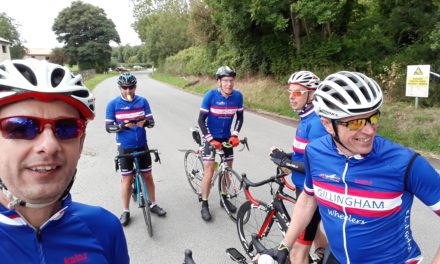 Saturday Club Rides are back!