The club held its annual round of the WTTA Hardriders time trial competition on Saturday.  We got very lucky with the weather yet again, but frustratingly the course had to be shortened by three or so miles due to roadworks.
Rob Pears (Procycling RT) took another win at this event, setting a time of 31.13 and beating VC Walcot rider Tavis Walker by over a minute.  Derek Smetham (Dursley RC) was right back in form after having a lot of 2014 away from the bike and finished in third.  Jake Hollins and Josh Jones were tied for fourth.
It was a double win for the Pears family, with Gill Pears (Procycling RT) well clear of the other women competitors.  Hannah Ricketts of Bristol South CC was runner up.
The over-60s category was again won by Rick Johnston of the Northover Vets team from John Gregory (Somer Valley CC).
The quickest of the home riders was James Hywel-Davies in an impressive 18th overall.  James Chant was 26th, Chris Mullett was pleased with his time and finished in 32nd while Sarah Wheeler was the lanterne rouge in 39th.
Thanks to the many people who helped out either on the course or in the hall, the riders and timekeepers were very complimentary again.
Full results here 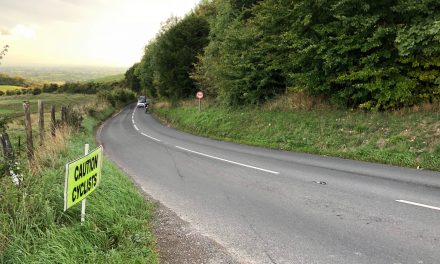