The penultimate round of the GDW mountain bike race was won by Kim Little, who has been getting some great results both off-road and on-road lately.  Kim took full advantage of his early season form to beat Nigel Brown after seven laps of a challenging course at the Alfred’s Tower woods.  With the ‘best four scores’ rule starting to come into effect, Kim’s win also meant he clinched the series title with a round to spare.
Nigel headed Kim from the start on a very cold morning, and led into lap two but Kim soon got past and pulled clear.  Andy Parsons took a good third place on his new 29″ wheeled Giant after being pushed hard early on by Yeovil CC junior rider Kris Caines, who took fourth.  Kris’ dad Darren was next home in fifth and the last of the unlapped riders.  Vince Hounsome was a lap down in sixth, while everyone else was two laps down or more.
Full race results and points tables are here
The final race takes place in just two weeks time on March 10th. 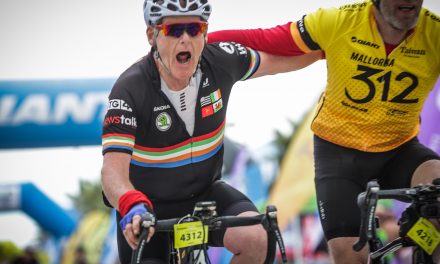