There were some fast times at last night’s Bruton tt, in spite of the rain making the faster parts of the course a bit tricky.  The final miles were made quicker than usual thanks to a tailwind and that contributed to a few riders getting some course best times.  Kim Little took advantage of Paul Hopkins’ d.n.f. due to a puncture and won with a p.b of 47.44, a minute faster than he has managed before.  Simon Rouse made an even bigger improvement, knocking 1.44 from his pb with a time of 48.24 for second place.  Shaun Hutson, Trevor Bartlett and Paul Wingrove all managed pb.s as well.  Vince Hounsome and Julian Chown tied for third on 48.30.  Richard Hansford put in a strong ride with a time of 52.47 for 10th place while junior rider Josh Day finished in 57.02 at his first attempt at this course.  Jane Pritchard and Emma Bradley weren’t quite as closely matched as last week, but there were still only seven seconds between them, with Jane fastest on 56.46.
Results here. 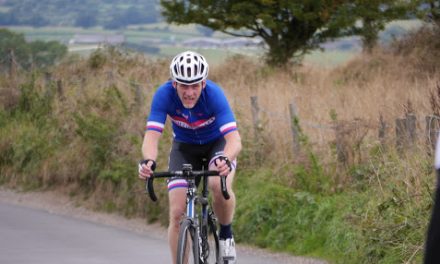