There was a smaller entry than normal at this week’s tt, with just 21 riders turning out on a warm and sunny evening for the first club tt of the season on the Bruton course.  Kim Little was quickest again, six wins in a row now for Kim and he’s starting to build up a good lead in the championship.  Kim set a pb time of 44.07 in spite of a bit of a hold up behind a tractor.  George Smith was second and James Hywel-Davies third and fastest junior.
Alex Hookins finished fourth while fifth placed Adam Baker set a pb time.
Connor Geddes was another with a pb time and now leads the junior championship and Liam Teesdale set a quick time of 54.37 on his mountain bike.
results here
WESTBURY WHEELERS OPEN
There were five GDW riders at the most recent round of the Western TTA Hardriders series, tackling a challenging but fun 26 miles course.  Starting from the top of Gare Hill, the route went across Kilmington Common, then to Maiden Bradley, Frome, Nunney Catch, down to Bruton and finally up Druly Hill to the finish.
Kim Little sped round to score one of the highest placed finishes in the series by a GDW rider, getting round in 1 hour 2 minutes 54 for sixth place.  Charles Rees was also going well, completing the course in 1.05.14 for a 12th place finish.  James Chant was 25th in 1.13.52 and Chris Mullett was 29th in 1.16.19.  Sarah Wheeler bagged some more points for her 34th place to keep her at the head of the women’s series with just three events remaining.

Sunday Ride – or why didn’t we go mountain biking 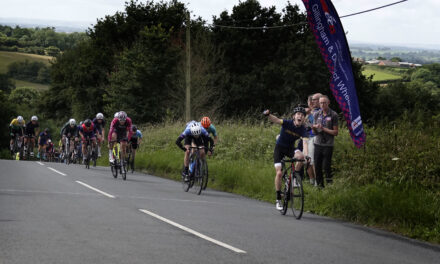