Army CU Winter Series, Round One

Darren Clarke and his fellow organisers had to work hard on Saturday morning to get the Ludgershall circuit prepared for racing.  The hard frost meant that the surface had plenty of tricky areas which needed some road salt thrown around.
The weather didn’t affect rider numbers however, with over 70 entrants to the combined 3rd and 4th Cat race.  It was then decided that these two groups would be separated out into two races, albeit on track at the same time with around a minute between their start times.
Nigel Brown and Josh Day were straight into the thick of the action at the head of the 4th Cat group, which fortunately meant that the inevitable early crash was behind them both.  The bunch quickly split into several groups of riders, with around 12 settling down at the front, working together and setting a good pace.
Towards the end of the race this lead group was down to 10 riders, but still included Josh and Nigel.  The group’s fast riding meant that they caught the tail end of the 3rd Cat race, which was now a very large number of riders as the dropped 4th Cat riders had joined in with them.  Unfortunately this group of riders didn’t move over and get out of the way, which would be the usual race etiquette.  As the race entered its final laps all the leading 4th Cat riders got boxed in and mixed up with the other riders.  The event ended with a sprint finish, leading to some careful studying of the finish line cameras by the race officials to somehow work out who finished where in their respective races.  Early viewings suggested that Nigel beat Josh, with both in the top 5.
UPDATE – Results are out now, Josh has been credited with third place but Nigel, who definitely finished ahead of him, hasn’t been listed on the results at all… 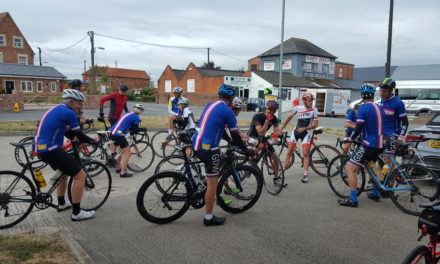